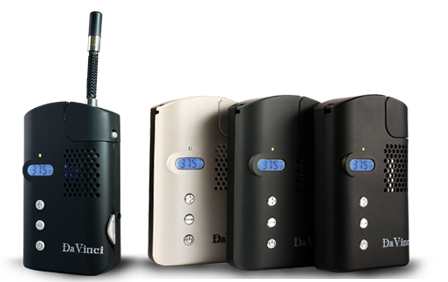 Medical marijuana is becoming more and more accepted as a method of helping ease the symptoms of all manner of ailments. Society is quickly changing the way they look at the drug, and those who have to use it are changing the way they look at taking it. Right now, it is vaporizers that are trending, with research showing this to be a smart decision. In fact, doctors who are normally willing to prescribe marijuana to their patients are also recommending that they invest in a vaporizer pen or other suitable options if the patient is in any way concerned about smoke inhalation.

What portable vaporizers, such as the DaVinci vaporizer, do is heat the marijuana to the point where vapor is produced, but harmful smoke is taken out of the equation. The patient still gets all the benefits of the THC without having to inhale the smoke that can have some potentially harmful side effects. This is done using either conduction or convection to heat the materials.

Convection takes via heated air particles, while conduction transfers heat via direct contact. Portable vape pens use this method, as do the bigger desktop vaporizers like the Silver Surfer Vaporizer. This method of marijuana delivery has been accepted as safe for a number of years now, as well as being a great way to get the same levels of THC, the active therapeutic chemical, as you would get from smoking a joint. The fact of the matter is that using a vaporizer when taking marijuana means omitting as much as 95% of the smoke and carcinogens that you would get when taking a hit from a joint.

All of this research has prompted those who would traditionally reach for a joint to re-think what they are doing and make the switch to a dry herb vaporizer. It also helps that the popularity of these devices means that there is a style and a look to suit everyone. Vape pens come in all kinds of shapes and colors, while those looking for a portable device that looks a little different can go with something like the Magic Flight Launch Box.

The fact that more and more people are now seeing others taking puffs from an electronic cigarette means that barely a second glance is given to those using the vaporizer pen as their method of taking medical marijuana. It is also helping do away with the lazy stoner stereotype, as celebrities and musicians are getting behind the vape craze, as is the medical community. It is the health benefits that truly matter more than the aesthetics or perception of the devices, and research has proven beyond a shadow of a doubt that vaporization is the way to go when you are using marijuana. The technology and acceptance are now increasing at a steady rate, to the point where it's only a matter of time before medical marijuana is legal in every state. Learn more about vaporizing weed and vape temps with WhatsYourVapeTemp.com